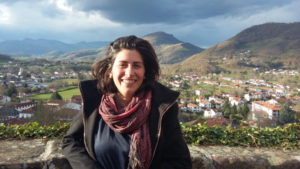 Since 2014, Argitxu welcomes you in her country, in Donibane Garazi (Saint Jean Pied de Port). She worked for the previous owners Bernard and Fafa, great travellers. Also traveler (two months in Latina America after her studies in Spanish, Thailand, Vietnam, Philippines, Central and Southern Europe…..), she welcomes pilgrims from all over the world to the Ultreia gite, in Basque, French, Spanish and English. She perfectly knows her country and the Way organization. No doubt she would be a great help to you in your preparation of the Roncesvalles stage.

You may recognize Argitxu in the movie the Way, shot in 2011 in St Jean. Nathalie discovered it when she received an e-mail from a pilgrim indicating that that he had recognized Argitxu after reviewing the film back home! Indeeed, like other inhabitants of St Jean and members of her family, the Way is for Argitxu a vocation and an extraordinary opening to the world.

In her spare time, if the weather is fine, Argitxu hikes in her Basque mountains. She enjoy talking about it in the gite with those who have crossed the Pyreneens on the GR10.

In 2018, Argitxu became director of the Ultreïa gite, after having trained all those who work or have worked at the lodge, first Nathalie. Now, she also helps Nathalie to develop the frequentation of the gite in autum and winter.

Coming in Ultreia, is also coming in Argitxu’s home. 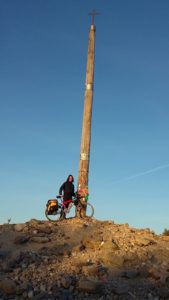 Laure, Argitxu’s cousin, welcomes you since this 2018 season also in her Basque country, after having cycled to Compostela in spring 2017. But, Laure has experienced the Camino and travelling for a long time….

Indeed, during her 15 years in accounting, she participated in 2004 with her sister to the creation of  Express Bourricot, the luggage transport company for pilgrims. In 2011, as a passionated sewing talent, she created her own company by opening an haberdashery and sewing workshop in the heart of Saint Jean Pied de Port.

Born in California, Laure is a Basque from St Jean and is also a traveler and hiker. In 2016, she accompanies to Nepal, with all the team of Gaurishankar, humanitarian association working in the valley of Rolwaling, her companion Xiril, professional of the mountain and president of the association for the assessment of the building reconstruction after the earthquake of 2015. Then, she follows her partner to Canada, putting her small sewing business dormant. Today back home, Laure creates with passion her Basque hats when she does not welcome pilgrims. Her creations are a great success in the Basque country. You can find them at Ultreïa because Laure has created a line for pilgrims! 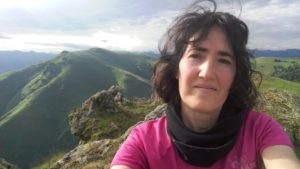 During her leisure time, Laure practices the trail running and hiking. Her favorite viewpoint is in the Basque mountains, between St Jean Pied de Port and St Etienne de Baigorri, at the top of Munhoa!

You may also have met in Ultreïa other inhabitants of the Basque Country …. hereafter their news:

Cindy also lives in St Jean. She helped us in September, 2017, just after being graduated in tourist accommodation and after working in Corsica. Originally from the Cevennes, which she loves as much, she also knows anothers ways like the Stevenson trail and an other hikers’ paradise around the Mont Aigoual. In 2018, Cindy leaves to Latin America for a big and beautiful trip. In 2019, she left to work in another beautiful French region, the Alps, then joined a prestigious hotel in St Jean.

Loreila, the bayonnaise, helped us in Ultreïa in June 2016 while studying social and family economy before leaving to discover Canada. Basque, having followed all her schooling in Basque until the baccalaureate, she also realized the Basque translation of our websites. Loreila had also created our Facebook page. Thank you Loreila! Today, Loreila works as a solidarity housing advisor in Bayonne.