THE WAY IN FRANCE 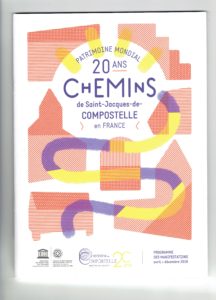 From Saint-Jean-Pied-de Port, numerous are the pilgrims beginning their way with their first Spanish stage. Regarding the French part, the French ways are often unknown by our non French-speaking visitors.

In this very special 2020 season, why not discover the many French roads?

Indeed, did you know that 2018 was the year of the 20th anniversary of the registration of the Ways of Saint James in France, on the list of the World Heritage by the UNESCO?

Many cultural events had taken place in France for emphasizing our heritage. For more information, you can consult the program hereafter.

Some pilgrims start their Spanish camino (called camino francés), with several stages further in France before Saint Jean Pied de Port, for training themselves before the mountain stage of Saint Jean Pied de Port – Roncesvalles. It is a very good strategy! In addition, they can enjoy very nice landscapses and a rich French heritage.

Numerous books and websites exist for planning your accomodation, and the first we recommend, is the website of the tourist office of your stage!

We recommend as well the label,  “LES HALTES VERS COMPOSTELLE“, administered by French gites owners. This label is proposed by the pilgrims for sharing their “good spots”dedicated only to the way.